President Ibrahim Mohamed Solih on Sunday evening reaffirmed the administration’s commitment to realising today’s "learned and rights-conscious" younger generation’s aspirations for improved protection of human rights. He was speaking at the official ceremony held to mark Human Rights Day and the 18th anniversary of the Human Rights Commission of the Maldives (HRCM).

Outlining some of his administration’s efforts to protect and promote human rights, President Solih recalled the situation faced by members of Parliament three years ago when they were barred from Parliament and exercising their freedoms of speech. Those elected to represent the people, he says, are today relishing the freedom to speak freely without fear of undue influence or impediments. The President also spoke about the benefits of a free press, underlining some of the harsh realities the media faced prior to his assumption of office.

Continuing in this regard, President Solih recollected how the previous administration had neglected and overlooked some islands when it came to developmental projects, a policy that his administration had reversed. From basic services including housing, water, and sanitation, each of the government’s projects aims to deliver on its commitment to protecting and promoting human rights without any discrimination, the President said.

On protecting the vulnerable in society, President Solih reaffirmed that all forms of harassment and violence against children, women, or the elderly would not be tolerated. He further assured them that his administration would work tirelessly to promote and protect their rights.

Concluding his speech, the President commended the members and staff of HRCM for their efforts in promoting, protecting, and upholding human rights throughout the country and urged the commission to pay greater attention to all aspects of human rights. 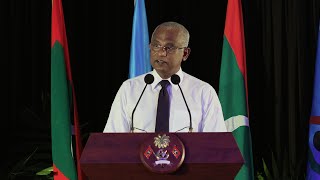 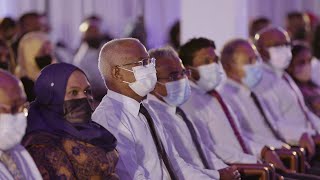