Rakibe Demet Şekercioğlu, the Ambassador-designate of the Republic of Turkey to the Maldives, has presented her credentials to President Ibrahim Mohamed Solih. Welcoming the new Ambassador and congratulating her on her new appointment, President Solih discussed with the Ambassador a plethora of issues, including trade and commerce, security and counter-terrorism, education, and human resources development.

The Maldives and Turkey established diplomatic relations on May 28, 1979; this year marks the 42nd anniversary of relations between the two. In this regard, President Solih expressed the importance accorded by the Maldives to its relations with Turkey and expressed appreciation for the continued support and cooperation extended by the Turkish government.

Speaking further, President Solih described as "growing concerns" the rise of extremism, radicalism, and terrorism, asserting that the international community should work together to address these concerns. He assured the ambassador of the Maldives' commitment to continue collaborating with Turkey and other friendly nations to combat terrorism, piracy, and other organised crime threats. The Ambassador expressed the importance of continuing cooperation in this regard.

The President and the Ambassador also discussed ways to increase training and higher education opportunities for Maldivians through Turkish academic institutions. President Solih then thanked the Turkish government for its continued support in training government officials and Maldivian diplomats.

The President and the Ambassador concluded their meeting by expressing hope for renewed and strengthened ties between the two countries under the new Ambassador’s tenure. 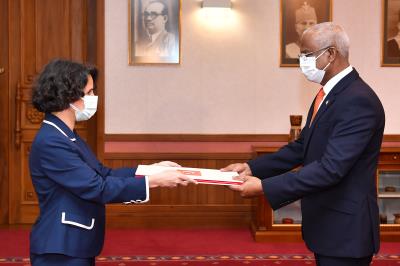 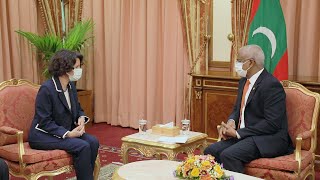