Speaking at the ceremony held this evening at Kulhudhuffushi City, the Vice President spoke on the prominence attached by the administration to the advancement of the health sector. In this regard, he highlighted the numerous achievements of the government within the past three years to develop KRH. Noting that the number of services fulfilled by KRH had reached almost 300,000, Vice President Faisal Naseem said that this confirms that the hospital has garnered public trust.

Speaking further, the Vice President stressed that the services established within the past three years had been services that had been overdue. He also urged healthcare staff to treat patients with respect and compassion.

The reproductive care facility established in KRH today is the first of its kind to be established outside of the Greater Malé region. With the establishment of the centre, a wide range of reproductive health services will be made accessible.

Following the inauguration, Vice President toured the facility, KRH and met with the staff and observed the situation of the hospital. 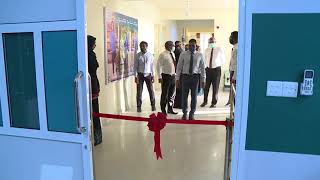