Vice President meets with Kulhudhuffushi City Council, WDC and senior institutional representatives, discusses the most crucial projects for the city Discussions at the meeting were focused on the challenges faced in waste management in Kulhudhuffushi City, the rapid progress of the city's development projects and the importance of social development and improving the city's infrastructure.

Representatives from the schools in Kulhudhuffushi City highlighted the developmental needs of the schools and the challenges faced by the schools. In this regard, they shared concerns regarding the delay in initiating some of the infrastructure projects planned for schools. Moreover, they also briefed the Vice President on the difficulties faced in recruiting personnel for key positions.

The representatives from the regional hospital noted the need to complete the ongoing and planned projects to address the space constraints faced by Kulhudhuffushi Regional Hospital at the earliest. Highlighting in particular that the past three years had been the most successful and significant period for upgrading the services of the hospital, they also noted that the government is currently working on upgrading the hospital to the tertiary level.

The Vice President emphasised during the meeting that the government places a high priority on the development of the health sector, particularly in regional hospitals, and that efforts are now being made to provide high-quality healthcare in various parts of the country. He stated that the issue of waste management highlighted by the City Council would be resolved. He also said that discussions would be held with relevant authorities regarding the issues raised by the council and institutional representatives. 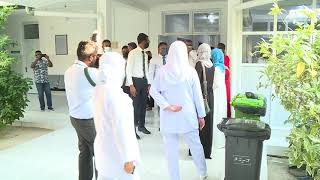