Vice President Faisal Naseem has met with the Council members and Women’s Development Committee (WDC) members of Nellaidhoo Island where the Councilors expressed their heartfelt gratitude over the numerous projects being undertaken by the government for the progress and development of the island.

At the meeting held in Nellaidhoo School this morning, Councillors noted that they needed a viable solution for land scarcity on the island and highlighted the vital socio-economic needs of the residents. Representatives from the Nellaidhoo Health Centre and School also spoke during the meeting, emphasised the challenges they face due to space constraints. Health Centre representatives also noted the need for more human resources and shed light on the facilities they require to upgrade the health services provided on the island. The WDC members also underscored that the biggest challenge they face in carrying out their duties is the lack of a workspace.

Vice President stated during the meeting that the objective of conducting such meetings is to identify the needs of the people and work closely with the people in finding mutually beneficial solutions. He also gave out the latest information on the developmental projects carried out by the government in that province. In this regard, he emphasised the tertiary hospital development project in Kulhudhuffushi City and the high-speed ferry network project, which would benefit all the people in that area. Moreover, he also urged the participants to always prioritise the development perspective and the betterment of the people above all.

Prior to the meeting, the Vice President toured Nellaidhoo School grounds and checked the development work of the two classrooms to be added to the school. He also visited Nellaidhoo Health Centre and met with representatives and inquired about their services. 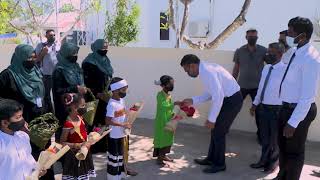 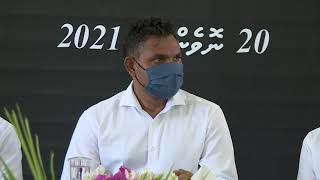