Vice President Faisal Naseem has stated that there are currently no islands left without any developmental initiatives underway with efforts to fulfill the President's pledges. He made the statement while delivering remarks at the function held this evening to celebrate the one-year anniversary of Hoarafushi Airport.

Highlighting that airports are service hubs where people come from different parts of the country to seek services, the Vice President urged service providers to work towards making it easier for those seeking services.

In his speech, Vice President said that decentralizing the country has been a key priority of the administration and that efforts to realize the target are being seen. He noted that the government had achieved significant progress in initiating developmental projects across the nation within the past three years.

The Vice President also participated in a tree planting programme held to celebrate the one-year anniversary of Hoarafushi Airport and planted a tree in the area. Earlier today, Vice President visited and toured Hoarafushi Health Centre and Haa Alif Atoll School, where he met with the staff and conversed with them. 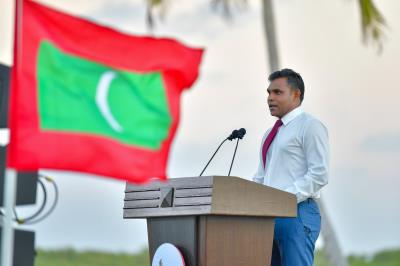