Noting that the number of students applying for A’ Level studies is lower, President Ibrahim Mohamed Solih has appealed to all state institutions and parents to encourage students to complete their A' Level studies. The President made this statement while speaking at the awarding ceremony for the O’ Level National Top Ten-2019. The event was held at Aminiya School tonight.

The President stated that the government's education policy aims to build people for the development of the country and provide a better future for students. In this regard, the President noted that the education sector of the country has undergone significant changes over the past three years. Speaking in this regard, he shed light on the successful work being done by the government, including the government’s first degree free education program, breakfast program, and integrated health screening program launched in 2019.

Speaking at the ceremony, the President noted that a new Education Act and a Higher Education and Training Act have been enacted in the country this year to ensure the right to education is guaranteed by the Constitution at all levels of education. The President also highlighted that the ICT Master Plan, formulated with the assistance of UNESCO, will come into effect in January 2022.

At the ceremony, the President also highlighted the details of the new satellite program to be launched this year in B. Fehendhoo, V. Thinadhoo, and V. Rakeedhoo, which did not have schools due lack of school facilities and an inadequate number of students in each age group. With this change, students from these three islands will not be required to travel to another island by ferry for their studies. Under the programme, students from the three islands will be taught by teachers at the satellite hub established at Huravee School in Male' City.

Among the recipients of the awards at this evening's function, there were five students who won first place in the world, while 42 students were ranked 10th in the world. 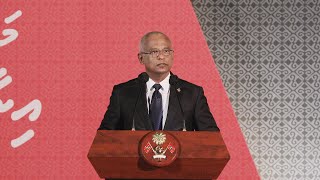 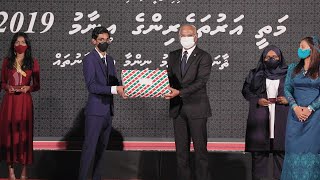