President meets Thaa Atoll Vilufushi Council: The councilors briefed the President on the developmental needs of the island

This afternoon, President Ibrahim Mohamed Solih met with Thaa Atoll Vilufushi Island Council members and discussed the developmental needs of the island and the most crucial needs for the island’s residents.

At the meeting, President Solih highlighted that some projects had to be halted due to budgetary constraints caused by the Covid-19 pandemic. However, the President briefed the councillors on the several projects included in next year's budget for Vilufushi Island development. In this regard, the President briefed the councillors on the government's plans to carry out the construction of the airport harbor and hospital development projects. He also stated that discussions would be held with relevant line ministries regarding the concerns raised by the councillors.

The meeting held with the Vilufushi Council was attended by the Chief of Staff at the President's Office, Uz Ali Zahir, and Parliament Member for the Vilufushi constituency, Hassan Afeef. 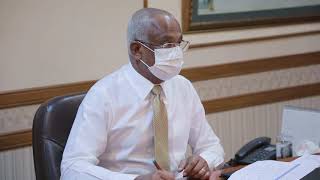