The Minister of Finance and Climate Change of Tuvalu, H.E. Mr Seve Paeniu, made a courtesy call on H.E. President Ibrahim Mohamed Solih this morning at the President’s Office.

The President welcomed the Minister to the Maldives and conveyed his sincere appreciation for the immense efforts made by the Tuvalu government in voicing out on climate change issues related to Small Island Developing States (SIDS) at the COP26 summit held this year in Glasgow.

At the meeting, the President inquired about the Covid-19 situation in Tuvalu and discussed various topics, including climate change, tourism, and fishing.

During the meeting, Tuvalu’s Minister also commended the Maldivian government’s continuous effort in combating climate change and highlighted the important roles played by President Solih and the Minister of Environment, Climate Change and Technology, Aminath Shauna, during the COP26 summit.

The President and Tuvalu’s Minister engaged in conversation on further improving bilateral ties between the two nations. 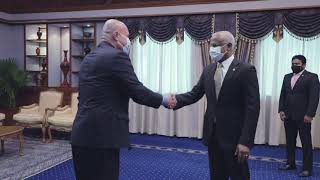