The President congratulated the new High Commissioner upon his appointment and welcomed him to the Maldives. President Solih spoke about the close bilateral relations enjoyed by the two nations. He highlighted that the Maldives and India share a special relationship and that no third nation can take India’s place.

The new High Commissioner of India, H.E. Munu Mahawar, conveyed warm regards on behalf of the President and the Prime Minister of India. He then praised the government of the Maldives for its achievements within the past three years, in particular, noting the efforts in controlling the spread of Covid-19 and the numerous strides in the economic recovery of the Maldives.

The President and the High Commissioner expressed their desire for further cooperation and assistance in all efforts towards the mutual benefit of both nations. They also agreed to further strengthen bilateral relations between the two nations, in areas of mutual interest, including socio-economic development, human resource development, security cooperation, and climate change.

The President stated that climate change is one of the most pressing issues for the Maldives and that the Maldives will continue to advocate for more ambitious action on climate change. He then commended Indian Prime Minister Narendra Modi for his commitment at the COP26 summit, pledging to cut its emissions to net-zero by 2070. 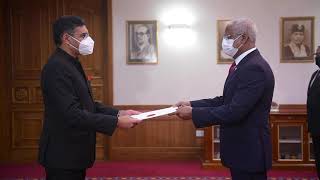