The New Ambassador of the Philippines presents credentials to the President The President and Ambassador discussed topics of mutual interest during this meeting, including the current state of Covid in both countries, climate change and vulnerabilities, and people-to-people connections.

The new Filipino Ambassador expressed gratitude for the Maldivian government's hospitality and assistance to the Pilipino population in the Maldives, and stated that he looks forward to working as the Maldives' non-resident Ambassador.

In conclusion, the President expressed his greetings on the Ambassador's appointment and expressed hope that the Maldives-Philippines partnership would flourish further in the coming years. 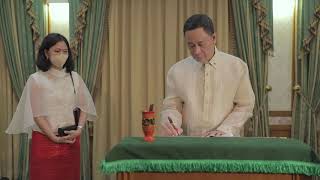