President Ibrahim Mohamed Solih has stated that one area in which the government will concentrate its efforts and energy on, over the next two years is the preservation and promotion of societal harmony. He made this remark at the official ceremony held to mark the 54th Republic Day of the Maldives.

Speaking at the ceremony held tonight at the Republic Square, President Solih outlined the government's ideology, emphasizing that it is to agree to disagree and go forward together, despite politically opposing views. He stated that the government has placed a high priority on maintaining social peace during the last three years.

The President noted that the introduction of the minimum wage on November 9th, 2021, which coincided with the Republic Day celebrations, comes as a long awaited gift for the Maldivian people. He highlighted the many societal benefits of adopting a minimum wage, asserting that this policy would enable employers to hire capable employees, which would enhance productivity.

Furthermore, the President underlined the necessity of providing an easier means of job matching for those who are unemployed, and stated that the establishment of countrywide job centers was currently underway. Shedding light on the need to build a peaceful society, the President noted the work undertaken by the government and social workers to tackle the issue of substance abuse, as well as the importance of conducting community-based rehabilitation programs.

Speaking at the ceremony, the President stated that the government's services should be delivered in an efficient and timely manner. He also stated that the administration has made digitization of all government services a top priority, which is included in next year’s state budget. 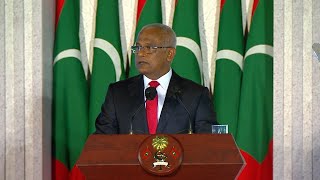