President Ibrahim Mohamed Solih has on Wednesday evening conferred the National Award for Public Service to 117 long-serving public employees. They received recognition at the official ceremony to mark the occasion of the 54th Republic Day of the Maldives.

The National Award for Public Service is the most prestigious award conferred by the President to individuals who have served the nation for over 35 years and are observed as diligent and steadfast workers who have contributed towards the development of their respective fields.

Five recipients were among those who received the National Award for Public Service for completing over 50 years of public service.

5- Faiza Abdul Gadhir, (Retired) Deputy Director General at the High Court of the Republic of Maldives, served more than 50 years.

Among the 117 recipients who received the National Award for Public Service, 32 individuals were female, while 30 individuals signified public employees who served in the islands. The recipients of the award include public employees who served the state in various capacities in different ranks, some of whom belong to the Maldives National Defense Force (MNDF), Maldives Police Service (MPS), and other uniform bodies.

The Director, Air Navigation Services and Aerodromes at the Maldives Civil Aviation Authority, Fathimath Ramiza, spoke at the ceremony on behalf of the recipients.

The National Award for Public Service is to be conferred annually at the official ceremony to mark Republic Day. However, as the award is newly announced and considering the large number of recipients, the government has decided to present half of the awards at the official function to be held later this year to mark National Unity Day. 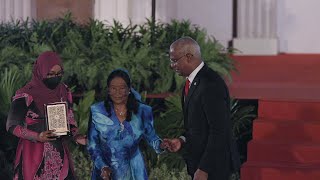