President meets AA Rasdhoo community, affirms commitment to listen to them and alleviate their issues President Ibrahim Mohamed Solih has met with members of the North Ari Atoll Rasdhoo Island community, affirming his commitment to continue to listen to their worries and alleviate their issues.

Speaking to the members of the community at the Atoll Education Centre late this afternoon, President Solih stated that 90 per cent of the projects pledged for the island by his administration had been initiated and is in different stages of completion. He revealed that the major objective of travelling to different areas of the nation is to gather the opinions and advice of the public and to understand the challenges faced in their daily lives.

Underlining the economic downturn undergone by the Maldives due to the Covid-19 pandemic, President Solih stated that the government had managed to control the pandemic with the firm support of the public, marking a positive upturn for the Maldives' economy in the future.

Speaking further, President Solih noted that a project to construct additional classrooms and a multi-purpose hall at Rasdhoo School had been opened for tender in order to address difficulties at the school arising from space scarcity. Further, he stated that the project to establish an ice plant on the island as per the requests from the local fisher community had also been opened for tender and that the housing project planned for next year would help ease the struggles faced due to housing shortages. President Solih also underscored that while the government had actively been trying to mitigate the erosion issues faced by the island, more work still needs to be done to address the matter fully. Acknowledging concerns from the youth of the island regarding Madivaru Finolhu, the President said that he would work towards finding a suitable resolution.

The Rasdhoo Island community extensively discussed their concerns and interests with President Solih during today's meeting. 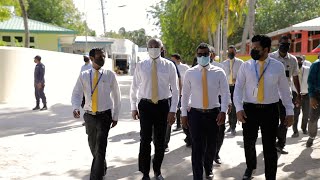