President Ibrahim Mohamed Solih has met with the Thoddoo Island Council and Women's Development Committee (WDC) this morning as part of his ongoing trip to six islands of North Ari Atoll (Alifu Alifu Atoll). During the meeting, Councilors stated that they aim to bring further advancement and development to Thoddoo Island by making the best use of the authority and financial autonomy granted to councils under the amendments to the Decentralisation Act.

Councillors shared the most pertinent needs from their residents with the President, including road development, upgrading healthcare facilities, proposed ideas on harbour extension projects, development needed for the local school and other ventures, including tourism and agricultural development. The WDC mentioned difficulties faced due to the lack of office space to conduct their activities.

Speaking at the meeting, the President shared the latest updates on various developmental projects on the island. He mentioned that the road development project would begin after the completion of the water and sewerage project. He also said that the Government intends to facilitate specialist services to improve the Island's health sector with the help of the Indira Gandhi Memorial Hospital (IGMH) outreach programme. While highlighting the completion of the school's multi-purpose hall and 12 new classrooms project, the President noted the Government would look for possibilities to address the lack of office space. He further affirmed that the government would also consider the ideas and suggestions proposed by the council for the harbour expansion project.

Following the meeting, the President toured the Thoddoo Health Centre and met with the staff members and also visited some farming plots in Thoddoo Island. Further, President Solih officially inaugurated the 12 newly-built classrooms and multi-purpose hall developed by the Ministry of Education in Thoddoo School.

Thoddoo Island is the first destination on President Solih's current trip to six islands of North Ari Atoll (Alifu Alifu Atoll). Besides Thoddoo Island, the President will travel Rasdhoo Island, Ukhulhas Island, Mathiveri Island, Bodufolhudhoo Island and Himandhoo Island during this two-day trip. President Solih is accompanied on this trip by a delegation of cabinet ministers and senior officials from the government. 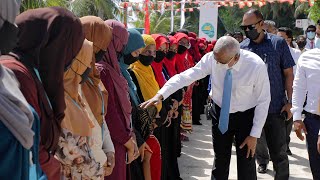 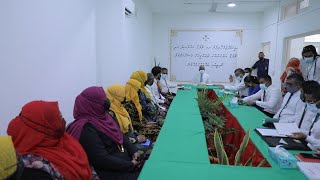