President Ibrahim Mohamed Solih has attended the final match of the SAFF Championship 2021 played between India and Nepal. The final was held at National Stadium tonight.

The President was accompanied at the stadium by senior government officials.

After the final match the President also presented the winning team with the championship trophy. 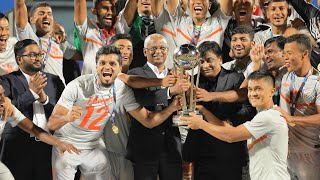