President Ibrahim Mohamed Solih has this afternoon attended the SAFF Championship 2021 football match between the Maldives and Sri Lanka, at the National Stadium in Malé City.

This was the seventh match in the championship, which would go on from 1 -16 October 2021, and the third match played by the Maldivian National Football Team. The Maldives won today’s match with a score of 1 - 0.

The President was joined at the stadium by Vice President H.E Faisal Naseem and former President Maumoon Abdul Gayoom, and the Minister of Youth & Sports, Minister of Development, Co-ordination and Monitoring and State Minister of Digital Technology and Enterprise Development of Sri Lanka, H.E Namal Rajapaksa. Other senior government officials and Maldivian supporters also accompanied President Solih at today's match.

The Maldives had previously won the SAFF Championship cup twice, once in 2008 and once in 2018. 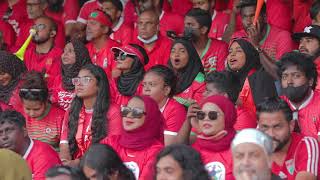