President Ibrahim Mohamed Solih met with the Haddhummathi Kalaidhoo Council this afternoon in the President's Office, during which the Councillors discussed the most pressing challenges and the development priorities of the island's community.

In this context, the Councillors highlighted concerns regarding the harbour's limited area, the need for new council office space, and the development of school infrastructure. They also expressed concerns about socio-economic development.

President Solih provided the most up-to-date information on the island's ongoing and planned initiatives. In response to their concerns, he indicated that some of the issues identified by the council had already been planned to be included in next year’s budget. He also added that he will consult with relevant authorities in order to address the rest of the issues raised by the Councillors. 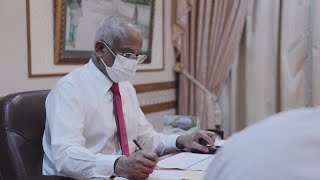