H.E President Ibrahim Mohamed Solih and the President of the 76th Session of the United Nations General Assembly (PGA), H.E Abdulla Shahid, held a joint press conference this morning at the President’s Office.

Speaking at the joint press conference, President Solih disclosed that discussions with the PGA was focussed upon strengthening the relations between the Maldives and the United Nations (UN) and on ways to further reinforce existing ties.

The President urged the PGA to embrace the values upheld by the Maldives in areas such as foreign policy, democracy, climate change, and upholding human rights. Highlighting that the Maldives has always pressed for the reform of the United Nations, President Solih also discussed the Maldives' wish to expedite such reform during PGA Shahid’s tenure.

The President and PGA discussed areas of interest such as the impact of climate change on Small Island Developing States (SIDS). They deliberated on ways to increase international involvement in such efforts through an inclusive arrangement.

President Solih said that he believes that the UN plays a central role in assisting the world to recover from the Covid-19 pandemic. He commended the efforts of the PGA for his role in resource mobilisation in regard to equitable access to affordable Covid-19 vaccines. Highlighting the plight of girls and women across the globe, the President stressed on the importance of gender equality, social parity and the empowerment of girls and women, urging the PGA to give precedence to such efforts.

Noting that several bodies of the UN had assisted the Maldives financially during the initial phase of the Covid-19 pandemic, the President expressed his gratitude to the UN on behalf of all Maldivians. 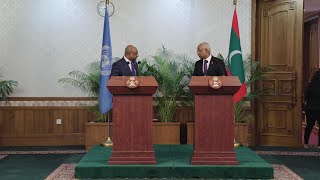