Vice President Faisal Naseem has held discussions with the North Miladhunmadulu Atoll Feydhoo Island Council. At the meeting held at the President’s Office this afternoon, councillors conveyed key developmental needs from their residents to the Vice President.

During the discussions, councillors presented their concerns regarding various issues. Some of the issues discussed include the challenges faced due to lack of administrative staff at the council secretariat, changes proposed to the design of the island harbour, space constraints at the school, the importance of a football field for resident youth, upgrades to the ferry network, solutions for land erosion and police presence on the island. They also discussed other issues centred around social and infrastructural improvements.

Speaking at the meeting, Vice President Faisal Naseem emphasised the reshaping of policies regarding governance of administrative divisions, with the amendments to the Decentralisation Act. The Decentralisation Act grants enhanced authority and financial autonomy to councils to structure the development taking place within their own constituencies. The Vice President urged councillors to seek efficient ways to utilise their resources to increase productivity and for the community groups to focus efforts towards increasing public awareness on various pertinent issues. 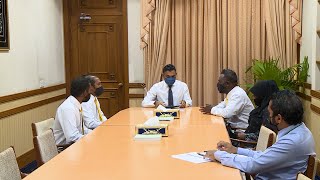 The President discusses developmental plans with council members of L. Maabaidhoo Island The best investment an organisation can make is in its people, says the Vice President Statement by His Excellency Faisal Naseem, Vice-President of the Republic of Maldives at the National HR Convention and EXPO 2022 The Vice President urges new graduates to utilise their knowledge and address social issues  The President visits Velana International Airport to inspect developmental progress