President Ibrahim Mohamed Solih has met with the members of the Gemanafushi Island Council of North Huvadhu Atoll, this afternoon at the President’s Office. Members of the council expressed their appreciation for the local health centre upgrades to provide 24-hour care. They stated that they were eager to provide their full support for the administration's development strategies for the island.

Councillors discussed their ideas for the island's development as well as the difficulties that residents are dealing with. The lack of staff and infrastructure at the Council Secretariat and health centre caused significant concern among councillors. They highlighted coastal area preservation, space scarcity at the harbour, land reclamation, road development and mosque maintenance as major concerns for the island's populace.

Furthermore, councillors indicated that the recently constructed ten classrooms at the Gemanafushi School required furniture to initiate single-session schooling, and that the school also needs a multi-purpose hall. They conveyed the concerns of the fisher community of Gemanafushi Island, requesting to expedite the ice plant project on the island and support with getting fair prices for their catch. They also relayed needs from the resident youth, requesting a youth centre and a football field.

The President committed to working with necessary authorities to address the issues mentioned by the council during the meeting. He revealed that the sewerage project is almost complete and that the clean water project would begin soon. He also stated that it is beneficial for councils to provide full assistance to the government when working towards their island's development. 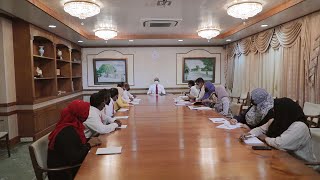