President Ibrahim Mohamed Solih has officially inaugurated the Job Centre at Alifushi Island of North Maalhosmadulu Atoll, stating that this centre is the first in a series to be launched nationwide. The purpose of this programme, he said, is to connect Maldivians seeking jobs with employers with open positions in their organisations. President Solih was joined by First Lady Fazna Ahmed at the ceremony.

Speaking at the official inauguration ceremony this evening at Alifushi Island, President Solih stated that there had been a noticeable amount of Maldivians seeking employment and organisations seeking employees, and the scope of job centres is to fill this gap.

Reiterating the importance of ensuring the maximum amount of positions are filled by Maldivian workers, he stated that in the future, organisations would be unable to hire foreign workers if there are Maldivians listed in the Job Centre registry who fulfil the requirements for those positions.

President Solih detailed this administrations success in limiting the number of foreign workers permits authorised, demonstrating the government's commitment to developing local human resources and offering adequate employment opportunities to all Maldivians. However, he continued, there would still be an expected shortage without training and developing Maldivians with the skills and expertise required to fill various positions. He revealed that the government plans to similarly develop Technical and Vocational Education and Training (TVET) programmes and services to provide the necessary skills training and guidance.

President Solih also delineated the successful National Internship Programme, with 213 interns placed in government agencies and 38 interns placed in private companies. He also stated that the government had initiated training for 600 persons under a programme to train 2400 individuals over the next two years to prepare for employment in various areas.

The President expressed his confidence that the initiation of this job centre would help many individuals, especially young adults, in the atoll to easily find suitable employment opportunities, urging the council to provide their support in this endeavour. He urged all residents of the atoll to take advantage of the opportunities offered. 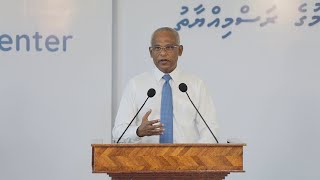