The Atoll Council raised several concerns during the meeting ranging from urban development to healthcare. They spoke regarding the ownership of some closeby uninhabited islands, waste management and a transportation network within the Atoll, highlighting difficulties faced in transferring Covid-19 patients between the atoll's islands. They also noted several requirements at Raa Ungoofaaru Island, the capital of the atoll, including enabling Covid-19 PCR testing at Ungoofaaru Regional Hospital, expanding the harbour, road development, queries regarding the opening of the Islamic Centre on the island, and several additional topics related to the development of the atoll capital.

Speaking to the councillors, President Solih answered their queries and provided the latest updates of projects ongoing in the Atoll. He also stated that all queries and concerns would be raised with the relevant government agencies. 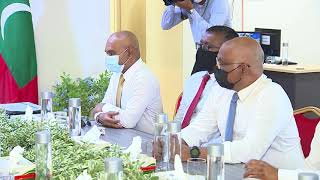