At the meeting held in Foakaidhoo School, the President and the councillors conversed about the issues and challenges faced in bringing the desired development to the island. Some of the issues shared by the councillors include the need for road development, space scarcity in the hospital, beach erosion, the need for housing solutions, and concerns regarding the project underway to establish a local football field. The members of the WDC also spoke during the meeting, underlining difficulties in conducting their roles due to the lack of an office.

Addressing the concerns raised by the Councillors, President Solih said that Foakaidhoo lacked many basic services when he came into office. He stated that the Health Center upgrade project is scheduled for next year and that he would speak with the relevant ministries in addressing the issues raised. 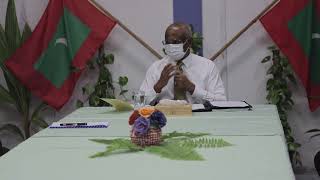 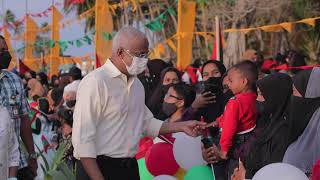 President and First Lady attend the Fundraising Gala Dinner to mark the 10th anniversary of Cancer Society of Maldives The President and First Lady to undertake State Visit to Bahrain tomorrow ‘Cyber Safe Maldives’ will be the basis for safe internet and technology use in Maldives, says Vice President Maldivian tourism industry became world-renowned because private sector had complete autonomy over its development, says the President Thousands of new job opportunities in the tourism sector emerged in the last four years, says the President