President Solih addressed the council's concerns and listened carefully to their requests to enhance several key sectors in the Island. They discussed health services, expansion of the harbour, tourism development, the progress of road development projects, solutions for coastal erosion, electricity services, creating more employment opportunities for youth and various other topics related to the socio-economic development of the Island.

Thimarafushi WDC members also spoke during the meeting, outlining their work and sharing concerns over their workspace and remuneration.

President Solih addressed the Council and WDC's concerns and shared the latest updates on the ongoing projects and issues discussed during the meeting. He highlighted that, due to the Covid-19 pandemic, the coastal protection project had been delayed; however, he assured that the project would be instigated before the end of this year. The President also said that he would consult with the relevant authorities for the possibility of inclusion of "dewatering" drainage systems and stormwater systems in the road development project underway on the Island. He further added that he would try to include the harbour expansion project in next year's budget.

The meeting with Thimarafushi Council and WDC was followed by a special dinner hosted by the Council in honour of the President.
The President’s visit to Thimarafushi Island is the first destination in his ongoing trip to 7 islands of Thaa Atoll. The President is accompanied by cabinet ministers, senior officials from the President’s Office and a delegation of high level government officials. 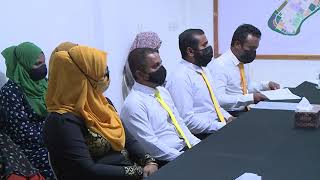