President Ibrahim Mohamed Solih has virtually met with Members of the Addu City Council this afternoon. During the meeting, Ali Nizar, Mayor of Addu City Council, reported that more than 60 of the Public Sector Investment Programme (PSIP) projects pledged for development in Addu City were already underway.

During this discussion, President Solih assured the Addu City Council that, given the city's considerable population, development projects would continue to move forward without delay. In this regard, he added that the government would collaborate with appropriate ministries to address the Council's concerns about the road development project, sewerage system upgrade, commercial port, housing projects, health-care services, education and other socioeconomic difficulties.

President Solih said that the government attaches great importance to facilitating the smooth operation of the PSIP projects, citing Councils had been entrusted with a considerable amount of responsibility under the amendments to the Decentralisation Act. 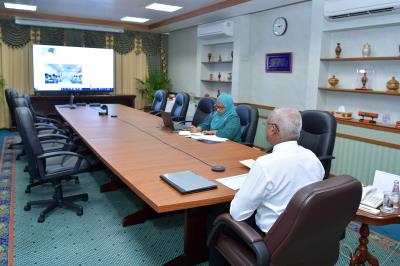